Well, I am hoping that going to local music events is worth writing about. However, Ben Franklin is no longer around to give me his opinion. On the other hand, if he had been around and had heard all this music he would be in shock and total disbelief. The evening of May 27 and all day June 6 we were privileged to hear some wonderful artists.

This was an event that included Randi Driscoll on keyboard and vocals, with Noah Heldman on percussion and guitar, Larry Mitchell on guitar, Shawn Rohlf on guitar and vocals, Jamie Shadowlight on violin, guitar and vocals, Monette Marino on djembe, and from Alabama, the John Martin Davis Band.

Randi opened the event performing one of her songs unaccompanied on keyboard and vocals, followed by one with Noah Heldman accompanying on percussion. All at once I realized that this is a very professional and talented performer. Musically, her sound is a bit country, a bit pop, with a touch of jazzy blues. I guess the catch-all category would be singer-songwriter.

From there, she introduced the John Martin Davis Band, who played several numbers in a quasi-bluegrass-folk-Southern roots style. For this event the band consisted of John Martin on guitar and lead vocals, with Daniel Davis on banjo and vocals. They are a very impressive group. They ended with The Doobie Brothers’ “Black Water” with Noah on percussion and Jamie accompanying on violin; quite fun!

Then, a big surprise – Jamie Shadowlight without violin! She sang a couple of her songs and played guitar. This is only the second time I have heard her sing. I really like her quiet, breathy singing style. 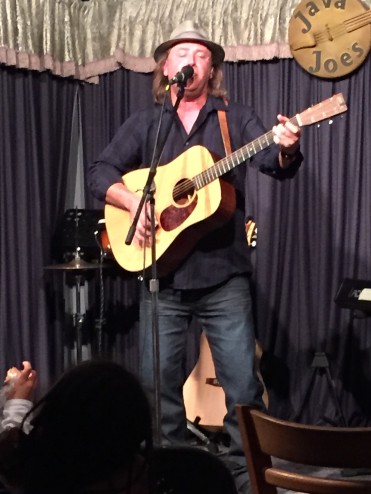 Next up was Shawn Rohlf, noted for his work with Shawn Rohlf and The Buskers (and the 7th Day Buskers). Shawn did some self-penned songs on acoustic guitar and vocals. He is a terrific storyteller via song. 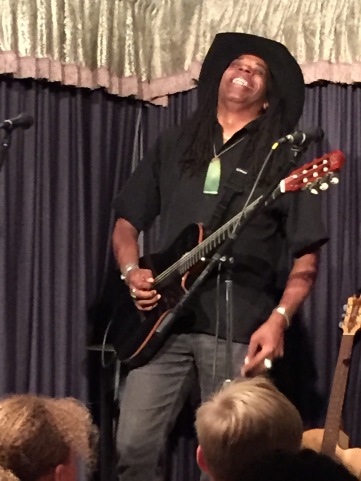 After a quick break, Grammy Award winning guitarist and producer, Larry Mitchell arrived and the next set was opened with Larry doing some solo guitar with Noah Heldman on percussion. Then Randi joined in with some of her songs and Jamie on violin. Then it was decided that Larry and Jamie would do a number together, and they asked Monette Marino to come up from the audience and keep rhythm on Noah’s djembe. They did a long instrumental improvisation where all three took the lead at different times. This was an amazing, hypnotic number; very transcendent and beautiful. Larry’s rapid-fire runs on guitar remind me of Al DiMeola, while the spaces he puts between these runs and chords remind me of John McLaughlin. I would say he is right up there with the best of them. And, he was suffering from a bad cold and a bit feverish at the time! I can’t imagine how good this would have been if he had felt better! 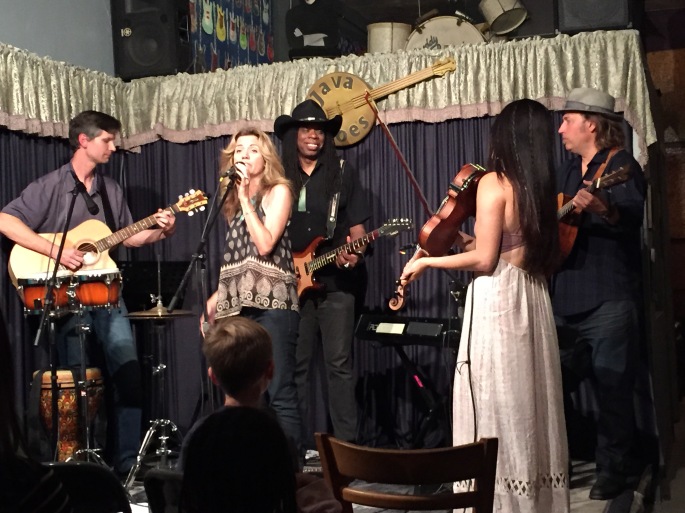 From there, all the players reconfigured on stage with Larry, and played more of Randi’s songs, plus on the final number they had several others in the audience who were singers come up and sing with them. After the show we all got to mingle about before leaving. This event definitely ranks high on my list of local performances. 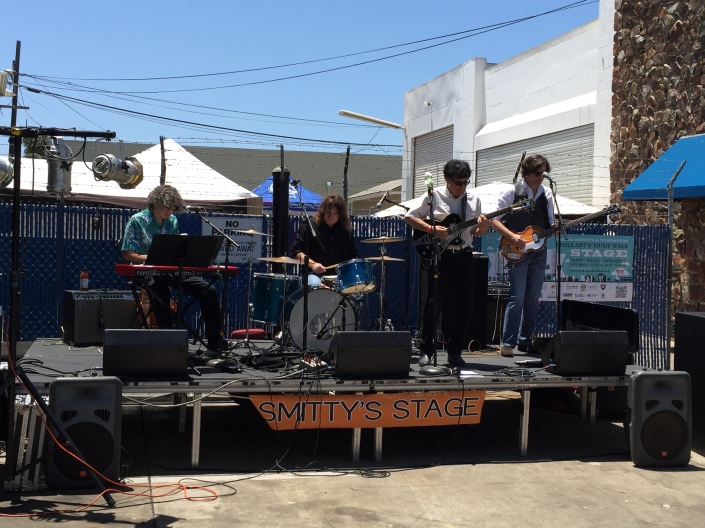 This is an annual event featuring visual arts, crafts, and several music stages, both outside and inside. While I am not sure how many musical performances there were, it seems there were at least 100 artists and groups involved. The music began at noon, and we decided to go to the Blindspot Records stage outside Smitty’s Garage to see Bart Mendoza and True Stories. True Stories consists of Bart Mendoza on lead vocals and rhythm guitar, David Fleminger on lead guitar, keyboards and vocals, Danny Cress on drums, and Orrick Smith on bass. As usual, they were amazing, playing mid-60s mod and British invasion rock as well as many self-penned songs of the same style. One pleasant surprise was when they did B Bumble & The Stingers’ “Nutrocker”, an early 60s rock take-off of the Nutcracker Suite. This is a tight band who makes it look so easy to “do that thing they do”. 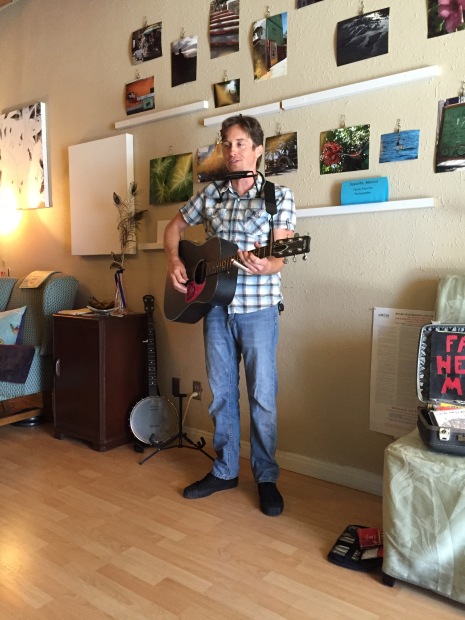 From there we had a little time to look at the arts and crafts before seeing Fast Heart Mart (Martin Stamper) at the Shanti Spa and Gallery. Martin played guitar, harmonica, and banjo and sang many originals as well as a few traditional folk songs. There were also some sing-a-longs. There were lots of fun stories between songs and some off-the-wall tunes about aliens, dogs and God. Martin is a member of Western Collective, and that group performs many of his songs. To describe his music, I would say it is well rooted in Americana and folk, with a quirky twist and sort of cosmic; quite enjoyable. 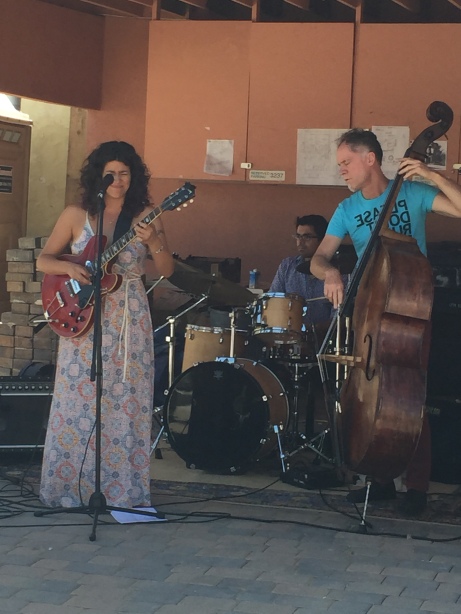 We had to leave Fast Heart Mart before his set was over so we had time to get to the next stage at Integrative Health. This was the jazz stage, and was outside. Here we were blessed with the fantastic playing of the Steph Johnson Trio, consisting of Steph Johnson on guitar and vocals, Rob Thorsen on string bass, and Fernando Gomez on drums. This was the highlight of the day for us. Steph has a very soulful way of singing, and her guitar playing is like a funky Wes Montgomery, if one can imagine. It seems that before forming this jazz trio Steph had an r&b/funk band and that makes sense. She played some Wes Montgomery, as well as Stevie Wonder, a funky jazz version of Cole Porter’s “Anything Goes”, and many self-penned songs. Bassist Rob Thorsen had some inspiring solos and there were also a few drum solos for Fernando Gomez, showing off some pretty slick moves. Steph is such a joyful person with an authentic concern for others and for nature and it shows through her music and being. We will definitely be going to more of her performances.

From there we headed to Kensington for some delicious pizza at Haven Pizzeria, after which we were close by the Kensington Library stage where Normandie Wilson was performing. Normandie was playing keyboards and singing, and was accompanied by David Fleminger on guitar and bass, and Danny Cress on drums. She played some new songs, as well as some from her two most recent albums. There were a few instrumentals and most were vocals, primarily all self-penned. She also did a wonderful arrangement of Burt Bacharach’s “The Look of Love”. Normandie’s sweet vocals never sounded better and David’s accompaniment on guitar and bass filled-out the sound nicely. While there, we ran into Maggie Taylor, Jesse Grabow, and Bill Romero. After Normandie’s performance, David had to tear down quickly to get to DeMille’s Beer Garden stage for his performance with Alvino & The Dwells. We all followed.

Alvino & The Dwells are a sort of 60s surf/power trio, full of reverb and high voltage energy. I have wanted to see them for over a year but my schedule seems to always take me out of San Diego when they are performing. I finally had my chance, and wowie zowie are they great! We were immediately transported to 1962, before the British invasion, to the days of the Chantays, the Surfaris, the Ventures, and of course Dick Dale and the Del-Tones. It was the era of the secret agent man and James Bond, of Gidget and Moon Doggie, and of Tiki Bars. This is an instrumental band, featuring David Fleminger on reverb/vibrato guitar pyrotechniques, Tony Suarez, who largely held down the bass parts on some kind of self-created baritonish guitar, and Didier Suarez on John Bonham-power drums. Song-after-song, they blasted away into space in search of Project Mercury, and I believe they found it!

We stayed right where we were, too stunned to get up, and were prepared to hear the Shifty Eyed Dogs, but alas, there were scheduling conflicts, so we got the band leader, Scott Mathiasen going solo electric guitar and vocals. Scott has a blues-rock style of singing, and the songs were very much in the old hard rock blues style of the early 70s. These were all original tunes. He did quite well, and it only made me want to see the full band even more.

I have to say that while the Steph Johnson Trio was the highlight of the day, David Fleminger really proved his credentials as one of the best and most versatile guitarists in San Diego. I’ve seen him do so many different styles and all with masterful skill. And Normandie, I can’t say enough about Normandie and her songwriting as well as impeccable delivery, after extreme jet lag no less (she had just finished performing with Red Pony Clock the night before in San Francisco). It all made for an amazing day of music.

We came home fully musically sated. Tomorrow I head to Connecticut and won’t be back until Friday.