“I made up my mind
If this is the way life has gotta be
I’m gonna do the same thing
The same thing they been doing to me”
B.B.King – I’m Gonna Do What They Do To Me

It seems that musicians either die very young, from an excessive lifestyle, or they live very long lives – especially in the world of jazz and blues. Pittsburgh’s Joe Negri is 89, Les Paul died at the age of 94; Chet Atkins at the age of 77. Local blues legend Tomcat Courtney is 83 and jazz saxophone great, Joe Marillo, is going to be 82 this month. Jazz guitarist, Bucky Pizzarelli, is 89. Kenny Burrell is 83, as well as Joao Gilberto and John Pisano. Singers Bob Dorough and Jon Hendricks are in their 90s, and Tony Bennett is not far behind at 87. Is it the music that keeps them going? Most continue to perform into their 80s and 90s. Marian McPartland had a show on NPR, “Piano Jazz”, nearly until her demise at age 95. Pittsburgh’s great doo-wop DJ, Porky Chedwick, was 96 at his death and still had a radio show. Some of these players had a life of excess in their early years but then calmed down as they matured. Others have had a hard life in other ways, yet they persevered. Many have had a life on the road for most of their adult lives. Yet, they seem to live longer than the norm. Life insurance companies should take note of this. I have had this realization come to the forefront of my thought lately. 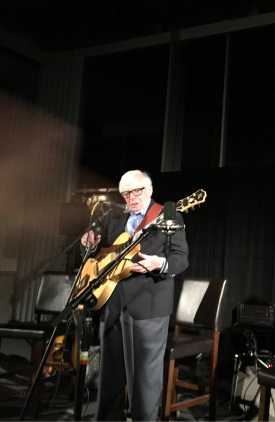 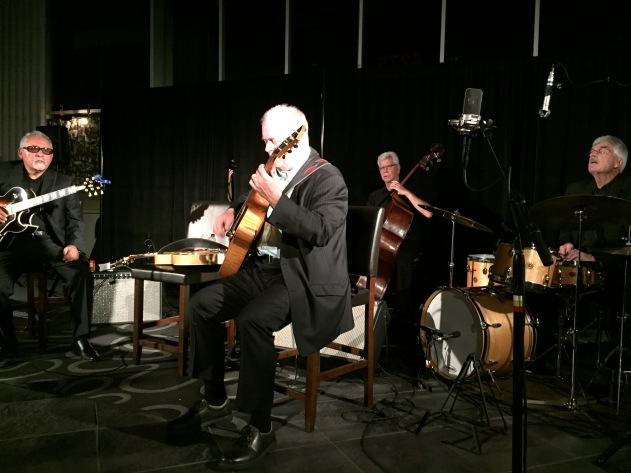 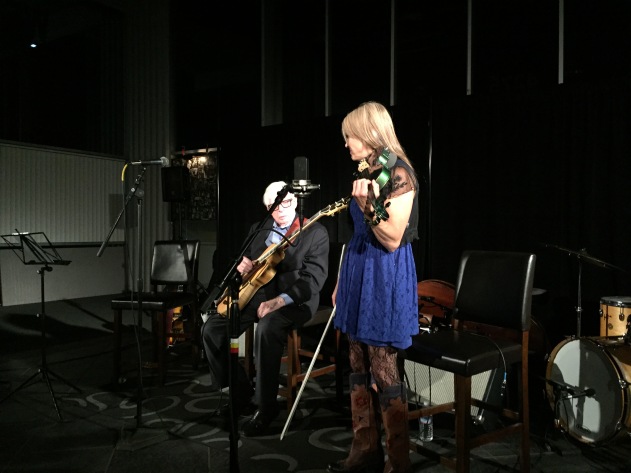 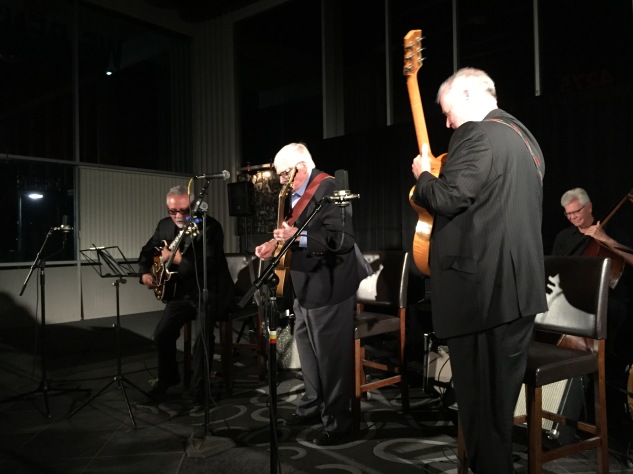 May 10th was Mothers’ Day. It was also the evening we got to see jazz guitar virtuoso, Mundell Lowe. Mundell’s birthday was April 21; he turned 93. But he was in Europe, on tour, when he turned 93, so the celebration was on Monther’s Day, at Dizzy’s. Ever since I became aware that this legendary jazz guitarist lived in San Diego, I kept watching for when he would perform locally. I had actually written it off thinking that he had retired from performing. Luckily, I was wrong, and was home when he performed on May 10. This performance included two other jazz guitar greats, Jaime Valle and Bob Boss; together, they were called “The Three Guitars” that evening, supported by string bassist, Bob Magnussen, and drummer, Jim Plank. Also, for two numbers, Mundell was joined on violin by his step-daughter, Alicia Previn Lowe. Yes, that is “Previn”, as in Andre Previn, her father. Sometime after Andre Previn (age 86) and singer Betty Bennett (age 93) divorced in the late 50s, Mundell and Betty were married, making Mundell Alicia’s step-father. Bob Magnussen and Mundell Lowe have performed and recorded together on and off for decades. Just a sampling of other people Lowe has performed or recorded with include: Billie Holiday, Bobby Darin, Lester Young, Charlie Parker, Bill Evans, Charles Mingus, Stan Getz, Doc Severinsen, Andre Previn, Barry Manilow, Sarah Vaughan, and Harry Belafonte. I’m leaving out several others.

The evening began with two songs performed by Valle, Boss, Magnussen, and Plank, which gave us a rich taste of what was to come. Since we had front row seats I got a close up view of their fretwork. Their playing was impeccable, with sweet, delectable solo work that simply amazed me. Then, Mundell Lowe joined in for several more popular and jazz standards, with each of the three guitarists alternating solos. Each has a distinct style with a distinct tone. Age has not affected Lowe’s abilities – his playing was still jaw-dropping. There were also a couple bass and drum solos where both Magnussen and Plank were able to show off their vast talents. At one point the others left the stage for Lowe to perform solo guitar on “I’ve Grown Accustomed to Her Face”, which was performed delicately and beautifully. Alicia did two songs with Mundell, the first with just solo guitar and violin. The second added the bass and drums. Alicia is violinist in an Irish band, In Tua Nua, and was a founding member of the Young Dubliners. Her violin was green. After the show we got to talk briefly with the players. It was quite a wonderful way to end Mother’s Day. 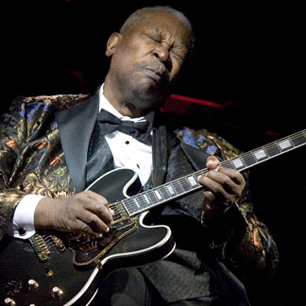 B.B. King passed away on Thursday, May 14 at the age of 89. On Friday evening we went to Proud Mary’s for dinner and to see Cadillac Wreckers. I’ve written about this jump/swing blues group before, and they did not disappoint. On a chair, in front of the band, the group had placed the album “B.B. King Live at the Apollo” and a rose. In addition to their standard repertoire, they performed some King-penned numbers including his huge hit, “The Thrill is Gone”. As singer/blues harpist Dane Terry said, “we are here to celebrate B.B. King’s life and his contributions to American music”. Larry Teves (Chickenbone Slim) also stopped by to watch the band.

My first exposure to B.B. King was in 1964, when my brother, who lived in California sent a reel-to-reel album home to my parents in Pennsylvania. The album was “A Salute to Tommy Dorsey”, with the Tommy Dorsey Orchestra led by Sam Donahue, recorded in 1961. On this album, the vocals on “Yes, Indeed” were sung by someone named B.B. King and an unknown female vocalist. This album did not feature King’s distinct guitar playing. In fact, as an 11-year-old, I knew nothing about King at that time. Later, when listening to WAMO-FM in Pittsburgh, I noted they played many blues artists, including King. Two songs I distinctly remember were “Chains and Things” and “I’m Gonna Do What They Do To Me”. These were played on the program titled “The Underground” and hosted by Porky Chedwick on weekend afternoons and Brother Love (Ken Reeth) most evenings. The B.B. King songs were mixed with folk, blues, psychedelic, and other obscure rock and jazz songs. It would be common to hear a song by Tim Hardin followed by B.B. King, and then followed by The Doors and jazz flautist Jeremy Steig. Later, in college in the early 70s I got to hear many blues artists as well as more of B.B. King. In the era of CDs, I purchased the B.B. King box set, “King of the Blues”, spanning his entire career on four CDs. It is amazing to see how his style moved from solid electric blues to more popular music with more singing than guitar playing. And then, he moved back to more standard blues later in life. King had a distinct style that was never fast and flashy, and instead went for a more deliberate, emotive style as if the guitar was talking, or wailing. In all cases his music made total sense musically and emotionally. A classic song that I have and love is a recording of his live performance with Bobby Blue Bland on the song “Sorry”. Here, he talks to the audience about relationships as he and Bobby play and sing. It is fun to listen to and easy to imagine being part of that audience.

I don’t mention much about classical, or serious music here. Well, here is a listing of the top 20 of the classics for which I have a warm spot in my heart:

And that’s it for this time. I head to the heart of Minnesota on Tuesday. The following weekend is jazz saxophonist, Joe Marillo’s 82nd birthday celebration at Dizzy’s. I am planning to go.